Working In An Australian National Park

Life In The Desert. Working At Karijini National Park In Western Australia.

The Australian Working Holiday Visa is all about throwing yourself into unusual jobs and unusual situations. That’s the only way to really make the most of the unique opportunity to work and live in the vast, diverse country that is Australia.

And so, throwing myself as usual into the unusual, I found myself working for three months in the desert and red dust of the Karijini National Park in Western Australia!

Karijini is a special place really. It’s a National Park, the second largest in Western Australia and a beautiful place where waterfalls cascade into winding gorges and mountains rise high along the horizon.

It’s also a harsh place, a semi-arid desert that on the surface is as inhospitable a land as you would expect to find in the middle of Australia. A place of red dust and unforgiving weather.

And Karijini is remote, miles from anywhere, scorching hot in the day and freezing cold at night and it was this place that I’d decided would be my home- and workplace- for three months. 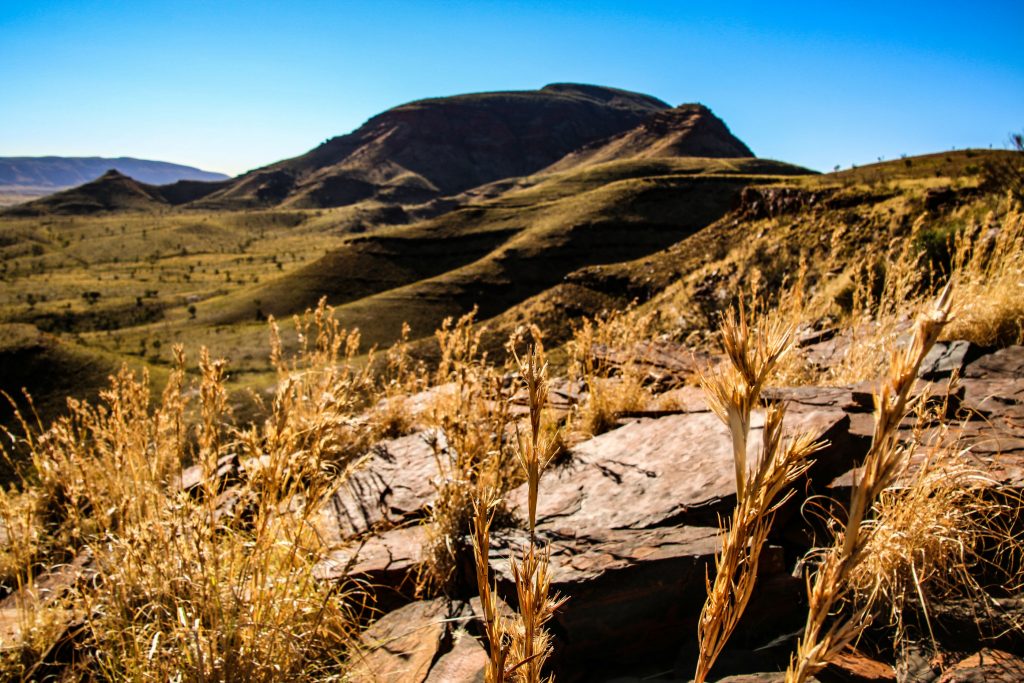 I had been working in an Outback Australian Roadhouse on the highway around 800 Kilometres south of Karijini when I got the call.

I had the job; an ‘Allrounder’ position at the Karijini Eco Retreat in the National Park. Allrounder meant that I’d be doing a little bit of everything- from bar to housekeeping- but it wasn’t the work that was drawing me here, it was the location. It was the chance to live in a National Park and I couldn’t turn that down.

Karijini National Park was a place that I wanted to get to know well, and the Working Holiday Visa is about working in incredible places while you’re on the road.

And the pay was pretty good too. 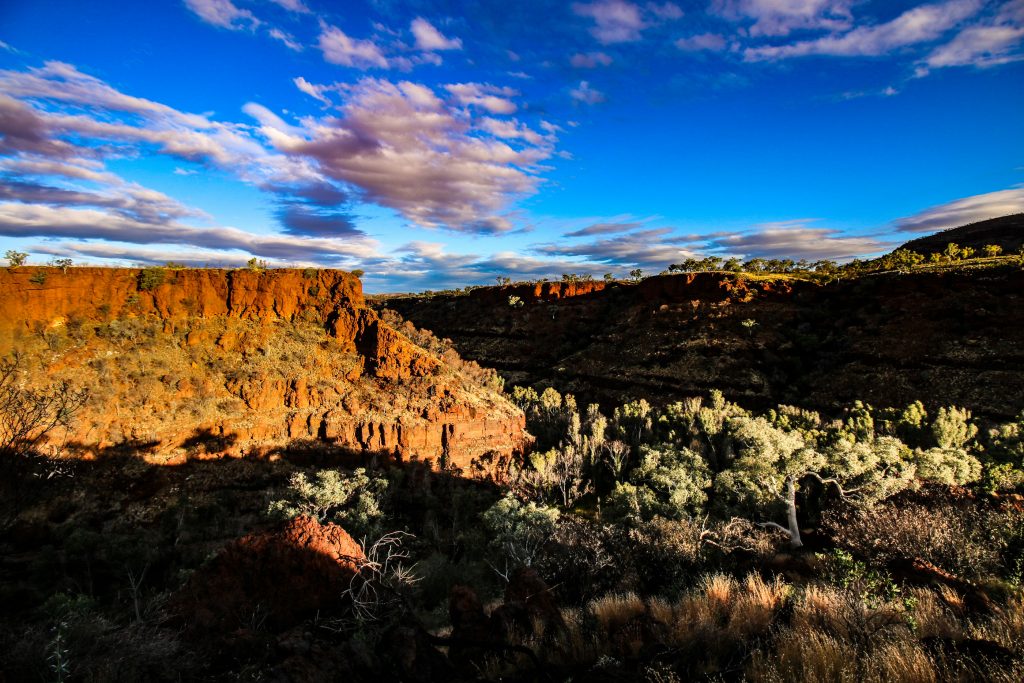 The managers had warned me that Karijini was remote.

There was no phone signal, almost no internet and the nearest town was 100 Kilometres away.

It would get cold at night too- it was winter in the desert- and during the day the temperature would soar. But at least there was zero chance of precipitation. It wouldn’t rain for months. There would just be dust. Everything I owned would soon be covered in red dust.

Oh, and I’d be living in a tent for three months. A Glamping Tent, but still a tent. 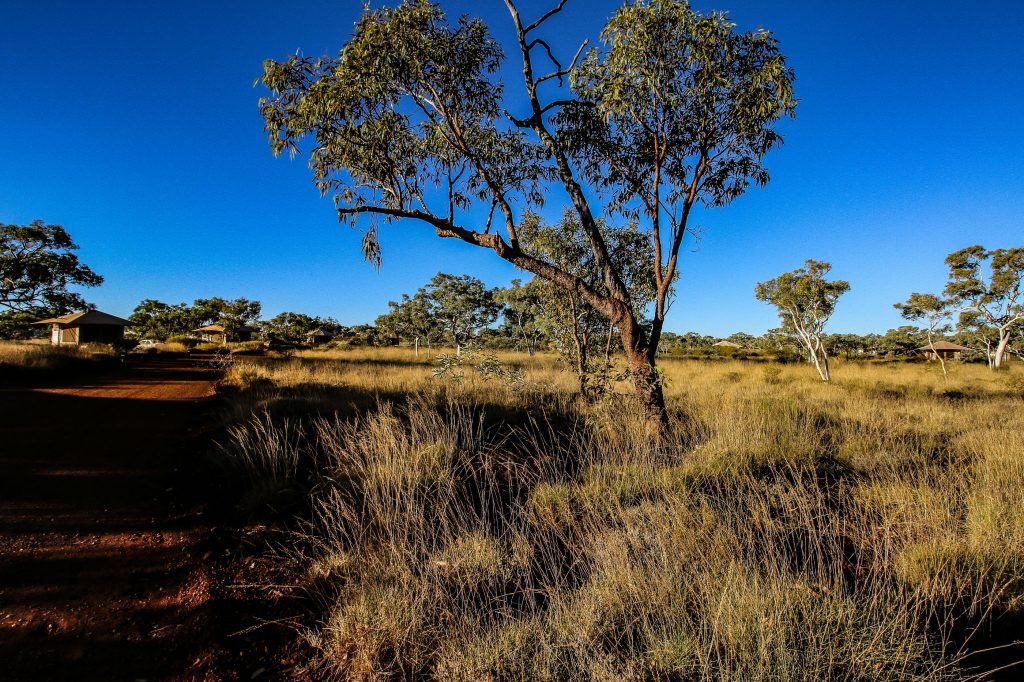 Why Would Anyone Want To Live In A Remote And Dusty Desert?

The road in was a dirt track for the last few kilometres. Mobile phone signal had dropped out half an hour down the road and it was a bumpy ride into the Karijini Eco Retreat.

The Eco Retreat is an Aboriginal owned enterprise- owned by the traditional owners of Karijini- and within the boundaries of the National Park the Retreat offers camping spots, a deluxe Glamping experience in ‘Eco Tents’ and an outback style restaurant.

I was staying in one of the Glamping Tents, a large raised canvas tent with an open air bathroom which ran on solar power. Luckily there was enough sunlight in the desert to provide hot water, at least most of the time.

This open air bathroom would periodically fill with either ants or frogs- sometimes both- and if you left the tent door open then you might return to find a huntsman spider making their home in the corner. 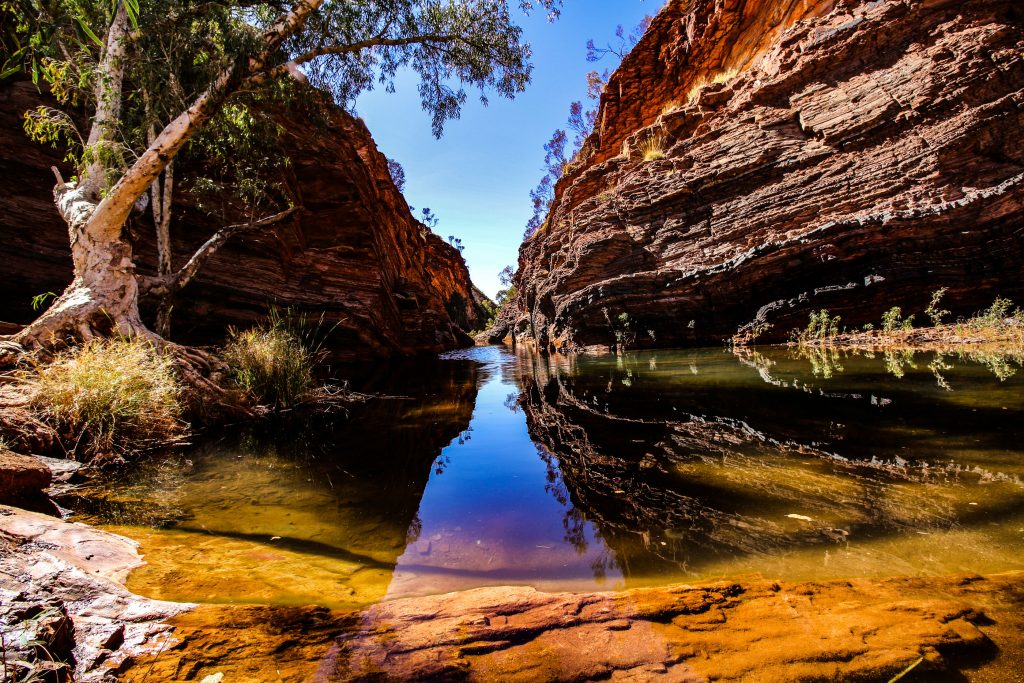 After a few weeks of cold nights things began to heat up as we moved out of winter. And that’s when the wildlife really began to emerge. It turned out that a lot of things in Karijini could kill you, or at the very least cause you immense pain.

The Retreat was home to Mulga snakes- also know as King Browns- which are some of the deadliest in Australia. I was told tales of a Mulga once slithering its way through the restaurant earlier in the year, during the middle of dinner service, and as it got hotter more and more Mulga and snake tracks were appearing around the tents and the restaurant.

I never actually saw one in the flesh though- in many ways this was disappointing, but in other more safety conscious ways, not so disappointing- Mulgas might be deadly, but they are shy creatures.

At least this lizard probably couldn’t kill me…

It wasn’t uncommon to chance upon Red Back’s and there was a resident population of Golden Orb Spiders weaving their webs above the staff kitchen, just waiting to drop on you while you ate dinner.

A musician playing at the Retreat’s bar one night was even interrupted when a huge huntsman began crawling along the microphone mid set.

In Karijini National Park you were in the midst of nature each and every day, and it made the experience much more humbling when you factored in that a large percentage of the wildlife could easily kill you.

But we weren’t just surrounded by the deadliest creatures in Australia- although luckily there were no crocodiles to add to the terror in this part of Western Australia- we were also surrounded by incredible gorges. 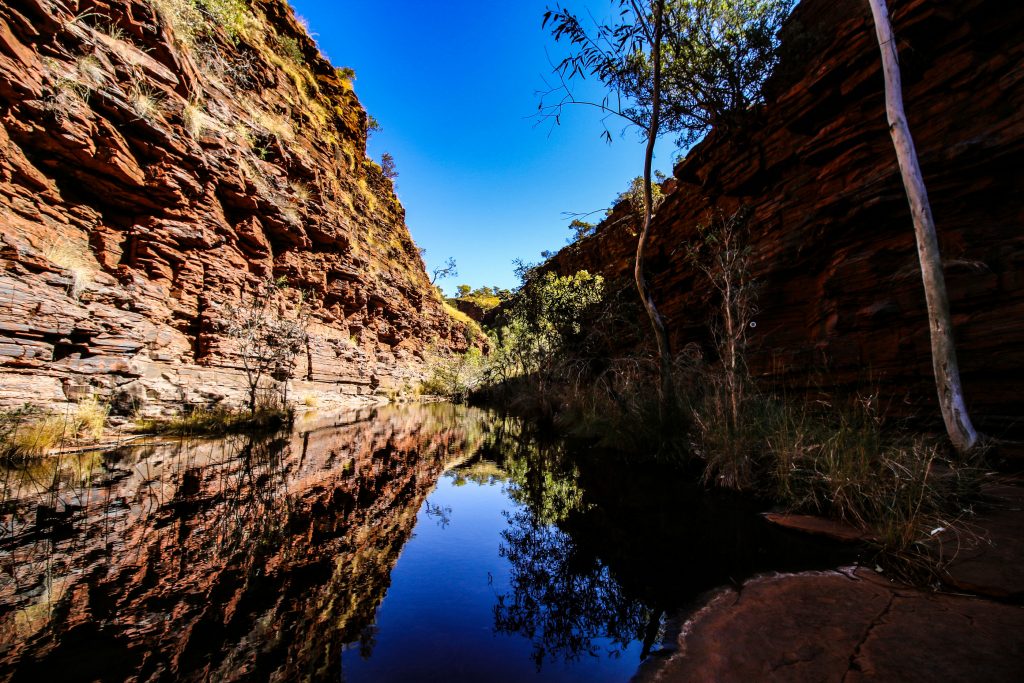 The Gorges Are The Real Reason To Visit Karijini National Park

On the doorstep of my Glamping Tent- well, a ten minute walk- was Joffre Falls, a huge chasm of a gorge with a spectacular waterfall that dropped straight into a natural swimming pool. It was a scramble down to the bottom of the gorge, but once there you could swim for hundreds of metres along a deep river, lying back and watching the gorge float past. 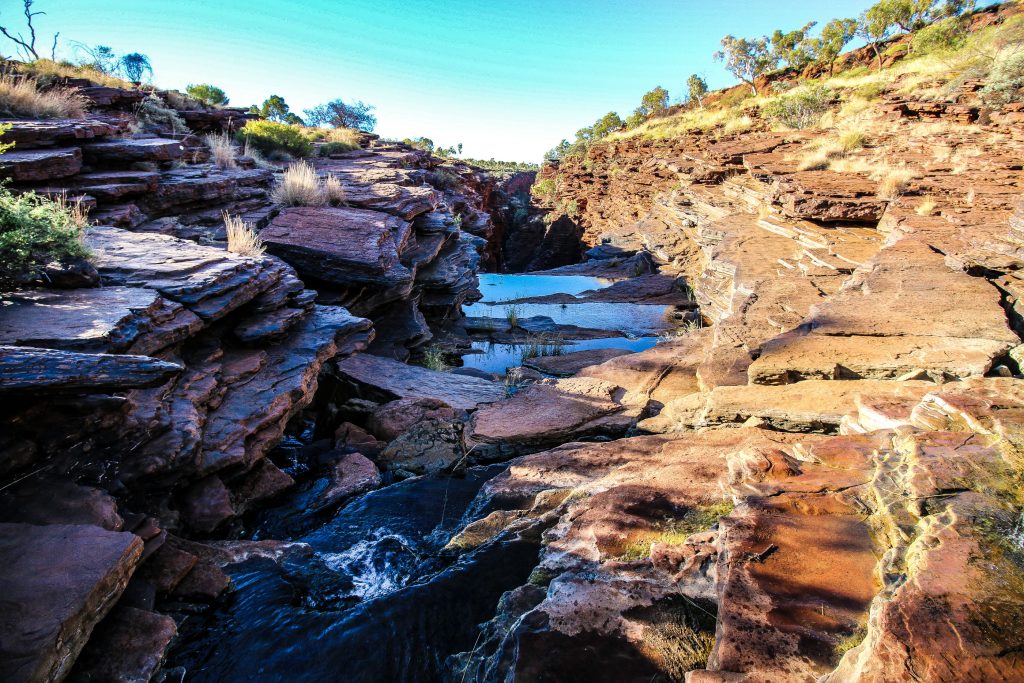 All the gorges in Karijini intertwined and collided, running for kilometre after kilometre, and each was spectacular in its own unique way.

On days off I would venture out, exploring a new gorge every time, and when I’d exhausted the gorges I started climbing the mountains, summiting the second tallest peak in Western Australia, Mount Bruce.

And after that I went swimming in the pools again and again, making the most of the National Park while I was still living in such a beautiful place. 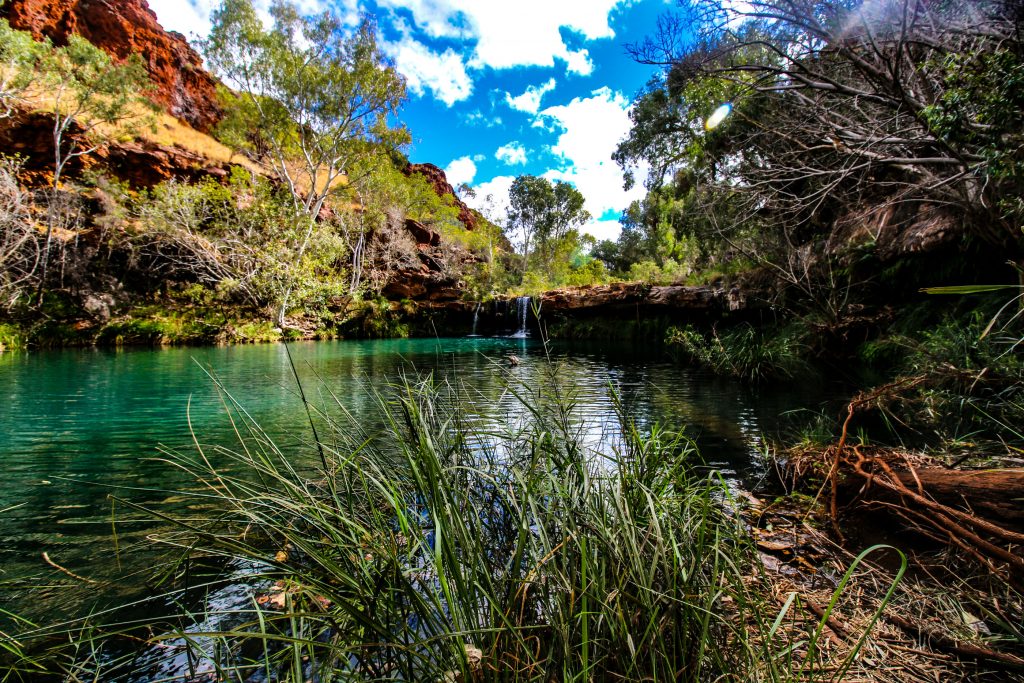 It wasn’t all exploring and swimming though. I worked long hours at the Eco Retreat, serving in the bar, waiting in the restaurant, taking bookings at reception, cleaning- everything really.

And everything was always covered in red, red dust.

But I could always just wander off after work and be swimming in a gorge to wind down. 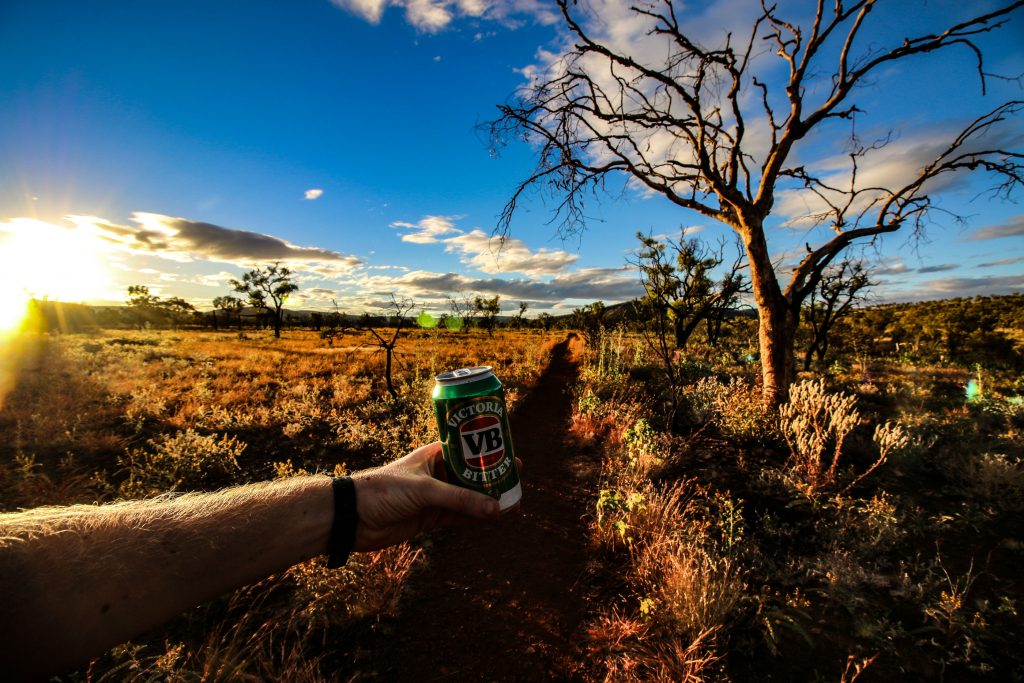 It was an experience, learning to live in harsh, remote conditions, and all the time getting to know Karijini National Park in a way you just couldn’t as a tourist passing through.

I left as the peak season was drawing to a close. Winter was over, and Summer was well and truly on its way.

In Summer this would not be a friendly place, with oppressive, humid heat and dangerous flash floods and cyclones ravaging the region. Only a few staff stayed on, and fewer tourists would be visiting.

I left after three months, hitting the road again to Travel Continuously!